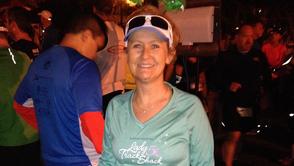 I started running in 2010 to keep up with Elise and Stephanie. My first 5K was 5 Points of Life in Gainesville in 2010. Having completed 5Ks, 10Ks, 15Ks, and a few half marathons, I completed my first full marathon at Space Coast in 2014 with my wife, Elise and daughter, Stephanie. I don't really like swimming so I do relays and duathlons.
But life throws us challenges. A week after completing the Shenandoah half marathon, I had a kidney removed in 2017, and I'm slowly coming back having to adjust to limited kidney function and home dialysis. Ken helps out with almost every Tri With Us event. 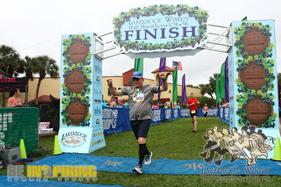 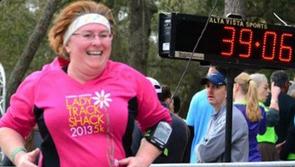 When I retired from the Navy, I had no intention of ever running or working out again. But in 2008 my daughter and I signed up for Disney's Expedition Everest. It was a lot harder than I thought. I started tri-ing at 54 when my daughter signed me up for Danskin Triathlon 2011 as her Christmas present. I joined Train to Tri with Joy VonWerder and met an incredible, inspiring group of women, including Julie Eason-Smith, Christine Barnett, Judy Stevens and Beverley Lewis. I had to work hard on swimming, but completed the Miami Mile in April, 2014. Having completed 5Ks, 10Ks, 15Ks, and a few half marathons, l completed my first full marathon at Space Coast in 2014 with my husband, Ken and daughter, Stephanie. I became a USAT Level 1 Certified Coach in 2015 when Tri With Us was started. Just after Space Coast in 2105, I had a total hip replacement so I had to take a "time out" in 2016, but biked Tour de Cure, walked some 5Ks and completed Longleaf Sprint distance in October and Disney Wine & Dine 10K in November. Having completed a few olympic distance aquabikes, Still on the bucket list is completing an olympic distance triathlon.​​ Elise is the club organizer and coach. 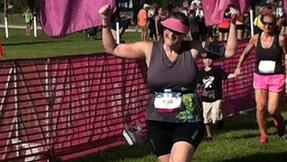 Beverley assists with club recruitment, fundraising and sponsorships and will help convince you to give it a "tri."

When I became “single” again, I needed something to get me out of the dumps and a friend of mine suggested I do a triathlon with her. So the summer of 2004 I joined a women’s only tri-training group and did my first triathlon in July of 2004. I have been hooked ever since. For someone who really never worked out much and never ran (hated running in fact), is a Type 1 diabetic and this was a big accomplishment. I am never going to be standing on a podium and often bring up the rear, but I have had so much fun and I have met some very wonderful people over the years. When the ladies training group I was a member of fizzled out, my friend started up a new training group for people like us – we want to be active, we want to be a part of Triathlon and we want to “compete” for the bling and personal accomplishment. This group of friends has helped me more in the last few years than they will ever realize and I am so thankful. In 2015, I completed my first ½ marathon and Olympic distance Tri! In 2016, I completed a full marathon, my first half ironman, and in 2017 I completed the Disney Dopey Challenge. Christine is our  Tour de Cure Red Rider.​